This month’s Boston Magazine has a pretty comprehensive article on Asian dining in Boston, including a spread focused on Chinatown.

We lucked out with finding street parking and strolled over to Gourmet Dumpling House on Beach St. There was a line out the door, but I was told it would be a 15 minute wait and 6 minutes later we were crammed in to a 2 top in the small, bustling restaurant. We started with scallion pancakes; they were extra crispy, flaky and delicious. The sautéed pea pod stems with garlic, and beef chow foon were also quite good. I wasn’t a fan of the pork and leek dumplings. The wrappers were thick and doughy and the filling lacked flavor. We also ordered the pork belly with preserved vegetables, which was a mistake. I think what we really wanted was the twice cooked pork. The slices of pork belly came atop a dome of pickled cabbage and turnip greens (maybe?). My mother would have loved it, but it was too much of an acquired taste for Steve to acquire. I thought it was okay, but not great.

The service was what you would expect, quick and efficient. The meal came to $52, including tip. The menus at Gourmet Dumpling House and Dumpling Café are eerily similar, but they are not owned by the same people. I think I prefer Dumpling Café – their dumplings are far superior. 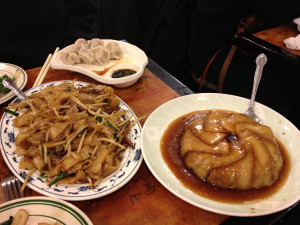 The night was still young and we had a parking space, so we wandered around trying to find a place for a drink. We settled on the Legal Seafoods in Park Sq. They have a downstairs area touted as the “Wine Cellar” and there was only 2 other patrons at the bar. I had an excellent pomegranate lemon drop martini and Steve enjoyed his wine.