For a recent cookout, Brian made a delicious potato salad. I liked the creaminess of the mayo with the sharp mustard flavor and the soft potato against the crunchy of the raw onions. I asked for the recipe and he told me to search for mustard potato salad on Food Network, so I did. I looked at over half a dozen recipes and none of them seemed like what I ate. I asked again and he sends me the link to Bobby Flay’s Mustard-Green Onion Potato Salad. He then writes, “of course, I used Vidalia onions and a potato mix.” Now, at the time, I did think there were an awful lot of onions left at the bottom of the bowl, and I had suggested a soak for the raw onions before going in to the salad to cut the strong onion flavor (he didn’t bother). I had to explain to him that green onions were more like scallions, not actual onions. There was also no parsley in his salad, and honestly, I don’t think he used the vinegar. Instead of sliced potatoes, he used a baby potato mix of red bliss, Peruvians and Yukon gold, making for a nice presentation. So, I’ll post the original recipe, but feel free to leave half the ingredients out and add your own – after all, it worked for Brian.

The same way that Indian food in America is primarily from northern India and only recently has other regional specialties have become more available, the majority of Thai food that we are familiar with is from southern Thailand. Guess what – there is a whole world beyond pad Thai out there (not that pad Thai isn’t delicious).  My friend Marc constantly laments the lack of good Thai in Erie, PA. I suppose that’s the price you pay for living in Erie, PA. So, we tried Thai North to fulfill his Thai food needs and to try something a little different. Steve must have been feeling adventurous, as he not only joined us, but even sampled every dish!

We started shrimp in a basket, which was essentially a spring roll with a whole shrimp inside. It wasn’t terrible exciting, but it was fried expertly and not greasy. Our second appetizer was called Dressing wings, which are deboned chicken wings, stuffed with pork and then fried. I loved the idea, but I think the filling was a little dense and over fried, making for a tough meat package.

Steve (breaking out of his chicken box) ordered the Tender Duckling, a stir fry of duck and assorted vegetables in a lovely honey lemon sauce. Marc chose the beef Panang curry (lemon, mushroom, baby corn, peppers, basil and walnuts. He aptly put it when he said, “It’s good, but I picked the loser in the group.” I found the beef an unappealing gray color and overcooked. My choice was the Chiang Mai noodle curry, which is also known as khao soi. It’s a giant soup bowl of wide egg noodles, a chicken drumstick, and tofu in a rich, coconut-milk broth topped with fried noodles on top. I thought it was delicious and loved the contrast of the crunchy noodles with the tender, soft ones. I would come back, just to order it again.

The restaurant is tiny, with 6 tables, but it’s a friendly, cheerful space complete with a wall of pictures of the Northern specialties that people may not be familiar with. Our waitress was cheery and attentive with the water refills, which is important when you are a spice wuss like me. The prices are quite affordable, with appetizers under $7 and entrées under $15.

I really wanted Marc to try some Korean fired chicken before he left, but sadly when I suggested it for dessert, he declined. 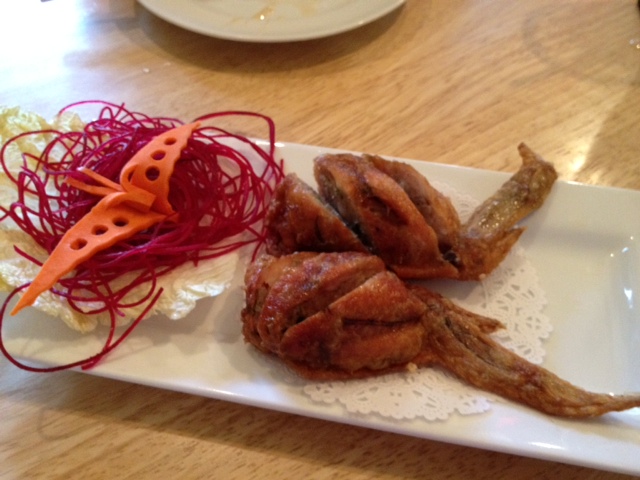