My St. Louis trip started off with so much promise. We arrived at the hotel at 9:30, both starving as neither of us had eaten dinner, so we are seated at Bailey's Range, a restaurant specializing in gourmet burgers, boozy shakes and ice cream by 9:40. I ordered the Sweet sweet bacon shake - Maker's Mark, salted caramel ice cream, and candied bacon. It was awesomely delicious. Unfortunately, the rest the meal was downhill from there. I ordered the American burger which was a hamburger topped with a mac & cheese patty. My burger was cooked to a rosy pink medium rare, however the patty was more like a gooey topping that completely destroyed the structural integrity of the burger. My plate was a gloppy mess by halfway through my meal. My bun was also cold and the fries felt like they had been sitting around as they were cold and mealy. Marc thought that his burger was too spicy and overwhelmed any flavor of the lamb patty. However, the beer list gets a thumbs up from Steve and the fact that it's a block and a half away from our hotel means he has made it his "headquarters" and has gone there every night for postmorteming, beer and ice cream. The burgers start at $6 for a plain and specialty burgers are around $11 . 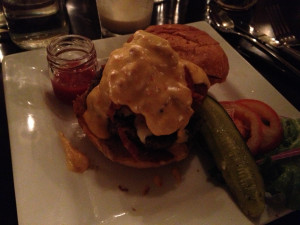 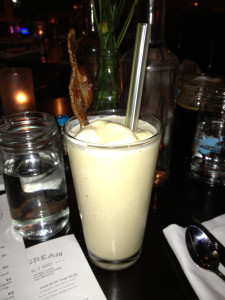 Steve was signed up for the five-mile St. Patrick's Day race on Saturday so he wanted a carbohydrate filled meal on Friday night. I found classic red sauce Italian place not far from the tournament. I was a little skeptical as we walked up to it and discovered it was in the basement of a Drury Inn. The bread basket was "focaccia" that was unlike any focaccia I've ever encountered before and not in a good way.

There is a specialty in St. Louis, toasted ravioli, which is neither toasted nor a ravioli. It is a meat filling, wrapped in dough and deep fat fried. I figured this may be my only encounter with toasted ravioli this trip so I ordered that and their special "flash fried" spinach for my dinner. The toasted ravioli reminded me of a beef empanada with the hard packed beef filling. I really enjoyed the marinara dipping sauce, but the whole dish was far too heavy. The appetizer came with five and I only managed to eat three.

The spinach was a fascinating dish; even two days later I still haven't decided whether or not I liked it. I think I really enjoyed the experience of trying it much more than the act of consuming of it, if that makes any sense. I was served a plate of spinach, deep fat fried so they were crispy, somewhat similar to kale chips however kale chips are baked so they are a healthier alternitive, but these spinach chips were completely saturated with grease and then covered in shaved Parmesan. I appreciated how unique the dish was but I didn't appreciate the subsequent grease pit in my stomach. Steve had with the whole wheat penne with vegetables. He said it was exactly what he felt like he needed before his race.

The restaurant was affordable and our server was attentive. I wish the tournament site was closer to "the hill" which is St. Louis's Italian district. There are supposedly some really great Italian restaurants there. 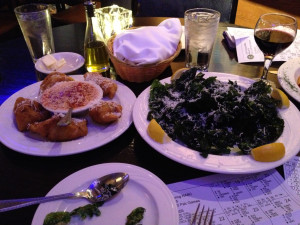 I had read some good reviews about Copia and it was very close to the tournament. It was also able to accommodate a large group of people. Seven of us trooped a block and a half down to the restaurant and were seated in a large open space that managed to lack any ambience.

The meal was awful. The service was slower than molasses - it took almost an hour to get our food out. My $25 pork chop, which was ordered medium rare, came well-done and dry. Another member of our party sent his pasta back as it came lukewarm instead of hot - no doubt it had been sitting there waiting for the rest of the entrées be ready. We had to ask for the bread basket that was present on all the other tables. I left the meal feeling forlorn that I would not be having a good meal anywhere in the vicinity of St. Louis.