Bronwyn, a new restaurant in Union Sq featuring the “food and drink of Germany & Central Europe” opened a few weeks ago to rave reviews. The word is that it’s packed every night and no one can get a seat in the outdoor beer garden (which is really just 3 picnic tables in a small enclosed area.)

But it was 9:30pm on a Tuesday night and Brian and I did not want to wait the 30 minutes at Yumewokatare, so I called Bronwyn and was told there was no wait! We sat inside the dark dining room. We ordered a Bretzel (pretzel), Knödel (a bacon bread dumpling) and Spätzle with emmenthaler, onion, and asparagus to share.

The Bretzel ($8) came out first and was huge. It had a delicious salty crust and I liked the apple mustard spread that it came with. It was reminiscent of the street vendor pretzels I used to get in NYC, but a million times better. 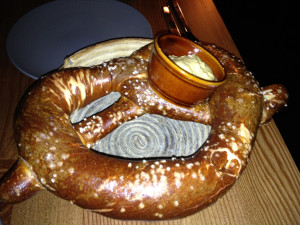 The Knödel was more like a savory bread pudding – it was rich and eggy. I really liked the flavors, but the portion was small for the price ($11). 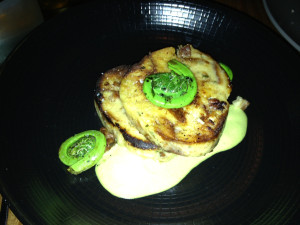 I love Spätzle ($18), and Bronwyn’s version is excellent, that is until we found the hair, which was when Brian was taking the last of the noodles. Gross. Our waiter was appropriately apologetic and took the Spätzle off the bill and brought out 2 desserts for us, gratis. 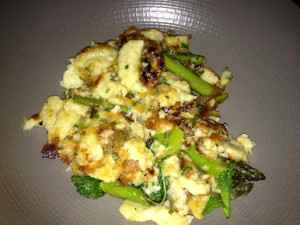 The first was the Berliner; two homemade, raspberry jelly filled, sugar coated, fried orbs of donut. They came with an excellent chocolate sauce for dipping, but I don’t know how well the jelly and chocolate went together.

The second was an apple crepe like thing. They don’t have a dessert menu online, so I can’t tell you the name of it. It looked like a sloppy trainwreck of crepe and fruit and applesauce, but it was still pretty tasty. 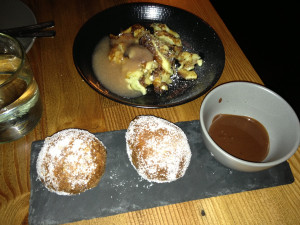 I enjoyed all the food (minus the hair), and I will certainly come back to sample some wursts. Brian enjoyed his beer. I think the prices are high, especially for the portion sizes.