Twice yearly, the International Community Church has a Burmese Food fair. I had never tried Burmese food before, so I was excited to go. There was a large group of us, so I was able to sample many different dishes; some delicious, some ok and one I really disliked. I would describe Burmese food as similar to Thai, but with some Indian influences. The dishes tended to the spicy side.

Mohinga is the national dish of Burma, so I had to have that. It is a fish soup, with rice noodles, eggs, rice, ginger, lemongrass, cilantro and garlic. It was rich and pungent; a hearty soup that would be great on a cold winter day, but was unappealing in the summer heat. 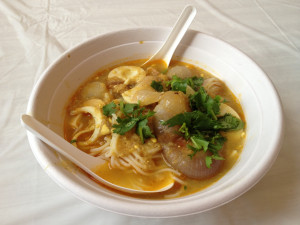 Next was a cold rice noodle dish with assorted pig parts (head, tongue, heart, ear). It was familiar and tasty. The parts were fairly tender and enjoyable. 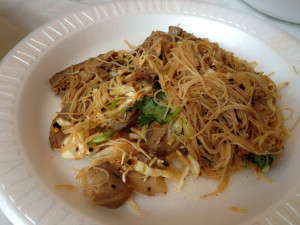 I tasted a chicken curry dish that was indicative of the Indian influences. It was served over wedges of paratha bread. The chicken was tender and I liked the bread. 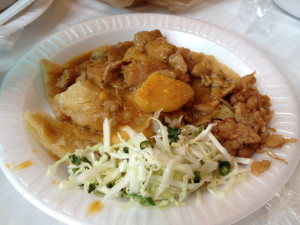 My favorite dish was the chicken biryani; the rice was studded with raisin, saffron, nuts and curried chicken. Although it makes no sense, the best way to describe it is that it tasted colorful to me. 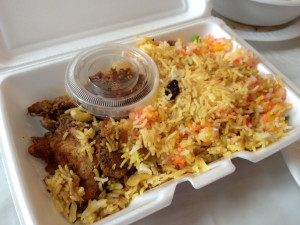 I tried a smattering of desserts, all variations of gooey, chewy or gelatinous, none being very good. I didn’t even bother with pictures.

If you are interested in trying this cuisine, there’s one Burmese restaurant in Boston – Yo MA in Allston. Or you can wait till the next food fair.