An extensive post about my mission to try the Cronut is coming soon, but I want to tell you about the pastrami sandwich I had during the 3+ hours I had to kill before I while I was waiting.

It was 6:45am when Dominque Ansel told us to come back at 10:30am. Even though New York is the city that never sleeps, the options at 7am in Soho are limited. But, I remembered that Katz’s is 24-hour and off to the Lower East Side we went.

Katz’s delicatessen has been around since 1888. It’s most famous for that scene in When Harry Met Sally, when Meg Ryan fakes an orgasm. I have a theory, she wasn’t faking it - it was afterglow from her sandwich. That’s how delicious it is.

Normally, there is a line out the door, but at 7am Wendy and I were able to stroll in and order a pastrami on rye (with mustard) with no wait. We could have even sat at the famous table, but we didn’t want to wait for it to be cleaned.

There are no words equal to the task of describing this pastrami – tender, succulent, deeply flavored and smoky are inadequate. I’ve eaten a lot of pastrami in my life, but what I thought was excellent pastrami pales in comparison. Katz’s just blows them all away. I want to be buried in a coffin lined with this pastrami, to ensure a happy afterlife. People say it’s a tourist trap, well, the tourists are here for good reason. They want to have a sandwich that they can tell their grandchildren about one day.

That said, the rye bread is too thin and a little cottony and our fries were stale. I enjoyed the crunchy, briny half sour pickles. Although the sandwich is quite large (Wendy and I split one), it is not cheap at $17. Maybe a better plan is to buy a pound of pastrami from the deli and bring it home, using your own bread for a superlative sandwich. 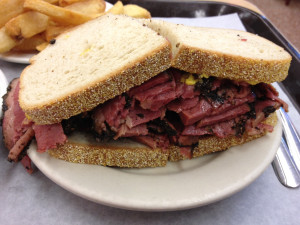