You have to take the Best of Boston awards with a grain of salt, as it seems there is a high correlation between the winners and their advertisers. Coincidence? Perhaps, perhaps not. That said, even if the winners aren’t necessarily the “best,” many are still quite good.

Steve and I went to the Fisherman’s Feast in the North End. We strolled down the street, contemplating the numerous food options: Italian sausage subs, rice balls the size of a bocce ball, and even fried Oreos. But when I mentioned that Pomodoro won the Best of Boston award for best North End restaurant, Steve suggested we give it a try. I was not hopeful; it was 7:30pm on a perfect Thursday summer evening and the streets were full of people. As we approached the tiny restaurant on Hanover St, we saw half a dozen people waiting outside and knew our chances of getting a table were low. But luck was on our side, a couple of groups had just left, so Steve and I were able to snag the last table in the 28-seat dining room.

The bread basket consisted of hot rolls and a large bowl of olives swimming in fruity olive oil. We started with the fried calamari ($12) and I’m not exaggerating when I tell you it was flawless; it is everything I want my fried calamari to be. There was an assortment of fresh, tender rings and tentacles in a light batter, fried to crispy perfection. Sometimes, I like a tomato based dipping sauce; I think the acidity balances the frying; however other times I want a rich and creamy aioli as a condiment. Pomodoro gives you both, as well as lemon wedges, in case true simplicity is your preference. The portion size was generous, but not enough to make you regret having ordered something fried. I think this is the best calamari in the North End, which is saying a lot as they are next door to Daily Catch.

Next, we shared the steamed mussels ($12) in a simple, but flavorful, tomato and onion broth. The mussels were large, tender and plump. Our server was thoughtful enough to bring more rolls for sopping up the broth.

We split the veal scaloppini entrée ($24) and the kitchen was thoughtful enough to divide it in to two plates for us. The entrée was the meal’s weak point; the veal was tender enough, but it was drowning in an onion balsamic sauce. There was simply too much vinegar. The veal came with a green olive risotto that was outstanding. I've had many risottos in my life, but never an olive based one and it floored me. I loved the brininess of the olives with the perfectly cooked creamy rice. I woke up this morning and my first thought was “wow, that olive risotto was really delicious – I wish I had more.”

Most restaurants in the North End do not offer dessert, so I was surprised and pleased when we were each given complimentary tiramisu. The serving were perfectly sized, just 3 or 4 small bites to sate the sweet craving I always have at the end of a meal.

There is one woman in the dining room; she is the hostess, server and busboy. As a result, the service was not speedy, but she was friendly and efficient. Steve enjoyed his wine (no cocktails). The menu is somewhat limited, but I don’t need dozens of mediocre choices, a handful of excellent ones will do just fine. I thought the prices are very reasonable. I do not have any pictures – the dining room is dimly lit and cozy.

I have a new favorite restaurant in the North End – Thanks, Boston Magazine.

If you read my flog, you know that I love biscuits. Tender, fluffy, flaky, buttery biscuits start calling to me as soon as I cross the Mason-Dixon line. I arrived in Atlanta Wednesday evening and the next morning I walked down to the Sweet Auburn Curb Market, a public market that was established in 1918. There was not much open at 8am, but I was able to buy some Georgia peaches and other fruit. There are a number of food stalls in the market, including a highly regarded apreas booth, but only Metro Deli Soul Food was open. I wasn’t hungry, but when I saw the pan of biscuits, glistening with butter, I knew I had to have one ($1.5).

It was only okay; it was a little squat and a tad tough, but I’ve discovered an “okay” biscuit down South still beats the pants off most Northern biscuits. I would definitely recommend wandering around the market if you are in the area. 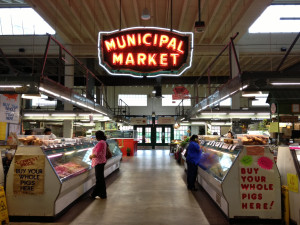 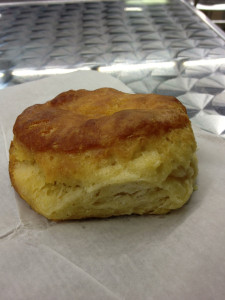 I had breakfast with my friend Doug at the Metro Café Diner (no relation to Metro Deli) and I had a basic cheese omelette ($6). It came with home fries and they let me swap the toast for a biscuit (score!). My omelette was overcooked, but the home fries were good. The biscuit was not better than the one at Metro Deli Soul Food. I was battling 0 for 2. 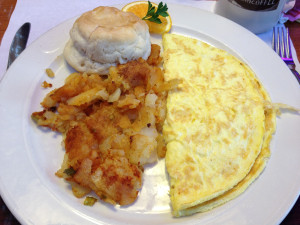 Low Country at the Atlanta airport

I was getting desperate; I was leaving Atlanta in 55 minutes and I still had not had a great biscuit. A fellow bridge player was on my flight and I mentioned I needed breakfast. She said that Low Country had “great grits and amazing biscuits,” Well, you don’t have to tell me twice. I got a single biscuit ($1.5) and she was right – it was excellent. It was tender and buttery and I was finally able to leave Atlanta with my biscuit needs satisfied. 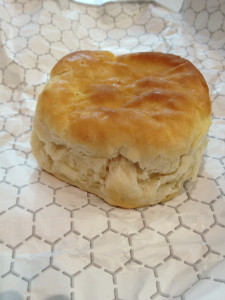