For the second time this year, I got up early and waited in line for a donut. Luckily, this was 9am, not 6am. Stephanie Cmar was one of my favorite contestants on the latest season of Top Chef. She was the sous chef at Barbara Lynch’s No. 9 Park, and left shortly after the show ended. She spoke about a passion for donuts, and yesterday she did a donut pop-up at the Butcher Shop (another Lynch enterprise). There were 2 selections: Blood orange glazed and Bavarian crème filled at $3 a piece. I arrived at 8:50am and was 4th in line. The door opened promptly at 9am and we filed in. Stephanie was at the helm and when I got to the front, I told her that I loved her on Top Chef and I thought she was robbed, but she probably hears that all the time. She laughed and she said, “yes, but I never get tired of hearing it.” She seems like a genuinely sweet and nice person.

On to the donuts – sadly, I was not impressed. The blood orange was the better of the two. The texture of the yeast donut was light and fluffy, but the glaze was a tad too sweet and the there was nothing distinctively blood orange about it. It could have been any generic citrus glaze.

The Bavarian crème filled was the real fail. The donut was heavy and dense. There was enough crème filling; I had 2 large bites of the hockey puck before I even saw the crème. It was over fried as well. What a disappointment.

She will be at the Butcher Shop for the next 3 weekends with the donuts. I’m really hoping this was a first day jitters and she will improve and refine her recipes. 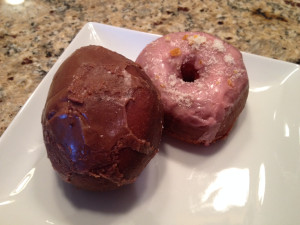 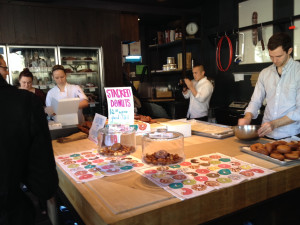 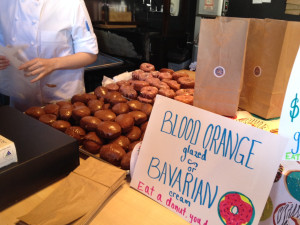