Alden & Harlow recently opened in the old Casablanca space in the middle of Harvard Sq. The website states "Alden & Harlow serves thoughtfully sourced, honest American food in a subterranean, modern and comfortable space. Inspired by the style of cooking he does for family and friends in his home kitchen, Chef Michael Scelfo prepares humble, unpretentious food," The description is eye-roll worthy, but the food was delicious.

My old work unit got together for a reunion dinner; the 6 of us were seated at a large comfortable table in the back, facing the opening kitchen. The menu is comprised of small plates that are meant for sharing, but much has been made of the "secret burger" (although, it is not much of a secret if it is listed on the menu – just sayin'), so Billy and Allison opted for that. Luckily, John and Carol were on board with sharing, so we got the burger ($14), beef neck ($14), Berkshire pork belly ($15), corn pancakes ($14) and the pork rib special. 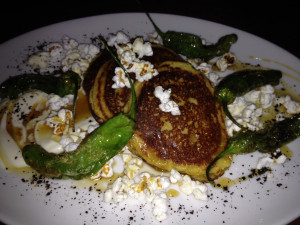 The corn pancakes were drizzled with maple syrup and roasted shishito peppers and popcorn were scattered on the plate. The pancakes were fluffy and delicious - vaguely reminiscent of Jiffy mix pancakes, which is not a bad thing. 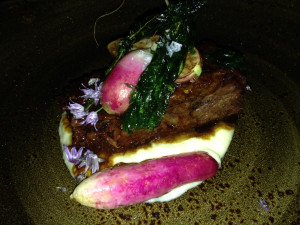 The pork belly was tender and topped with a layer of crunchy skin that reminded me of Chinese roasted pork. The beef neck was slowly roasted till it was meltingly tender, but unlike the pork, there was no component for textural contrast. Both were examples of how delicious meat can become with time and care. 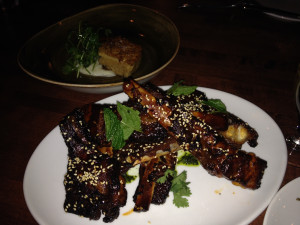 The highlight of the night was the pork rib special. Our waiter explained that they save up the ribs from the pork belly dish and when they have about 30 racks, they make ribs, smoked and lacquered with Korean flavors. They were awesomely delicious: a perfect balance of sweetness and a kick of spice. Azelene showed up 45 minutes late, as usual, and surveyed the table – she asked if she could have the last rib, which rightfully belonged to Carol. Carol is a generous soul, and gave it to her. If it was me I would have told her to order her own (and then stolen a rib from her plate). 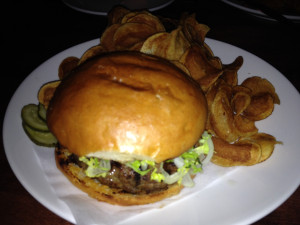 The burger was a generous half-pound affair with lettuce, onions, special sauce and a cheddar tuile on a house baked bun. I thought it was a delicious burger, but it was surpassed by the ribs. I loved the cascading mountain of homemade potato chips that came with it. Boston Magazine dissects each component of the burger in depth, if you are interested in more details.

We ended the meal with the smoked chocolate bread pudding ($9) and 6 spoons. It was a complex dessert; the chocolate was deeply infused with smoke. After 3 bites, I still wasn't sure I liked it, but I was intrigued which is just as good. I am not often surprised by dessert, so it was delightful to try something new and different. By bite #5, I decided that I did enjoy it.
Our server was attentive, proficient and did not seem to mind that we were there for almost 2.5 hours. I think it is a terrific option, if you are in the area. Don't miss the ribs, if they are available.