Going to Omelet House is a tradition for my friend Kim's family for whenever they are in Vegas; I got to join them for breakfast this time. The restaurant is local favorite serving home-style cooking in a large space filled with knick knacks and tchotchkes, kind of like visiting Grandma’s house. We had a short wait at 10:45am on a Thursday morning.

I was torn between the homemade corned beef hash ($10.29) advertised as the "Best you ever had," and the chicken fried steak & eggs with sausage gravy ($9.79). Luckily, Cousin Jeff was amendable to sharing, so we got both and split them.

Kim and her sister shared the "Cowboy Special” (homemade chili, cheddar cheese and onions) omelet ($9.79). I guess the omelets are regularly 6 eggs and for .89 cents less, you can opt for a baby omelet, which has 3 eggs. When they said say they wanted to share the baby Cowboy omelet, the waitress tried to talk them out of it. They stayed firm, and the baby ended up being a perfectly fine amount of food. 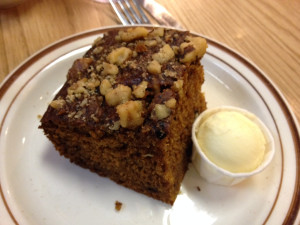 All breakfast meals come with eggs, potatoes and a choice of bread. I opted for the homemade pumpkin nut bread. The large, tender square of dark moist pumpkin bread was delicious. 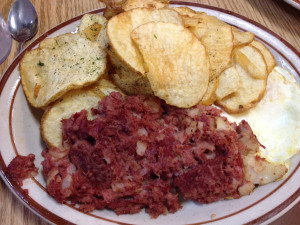 Sadly, the corned beef hash was too salty, and slightly mushy. 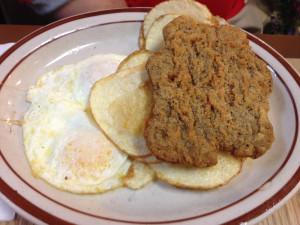 The chicken fried steak was better – the exterior was crispy, and the steak was not too tough. The breading was a little too thick and the sausage gravy lacked flavor.

Kim had described the potatoes as potato coins – thinly sliced potato rounds. They were disappointing. They were a strange thickness – too thin to be hearty, too thick to be crispy. Ultimately, they were tough, flaccid potato chips. My eggs were cooked correctly.

The service was proficient; water and coffee were consistently refilled. Kim felt they were having an “off day”

It is a 24 hour restaurant and lounge, located right on the strip. In a town that is constantly tearing down and reinventing itself, the Peppermill is an anomaly. It opened in 1972 and the décor has not changed. There are vinyl booths, neon light trim and stained glass light fixtures that depict frolicking flamingos. It completely embraces over-the-top Las Vegas tackiness of yesteryear. Director Mike and I always have breakfast one morning at Nationals and this was where we went. They do not take reservations, but will let you to call and put your name on the list for a particular time, which allows you to gets you the first available table at that time. We walked in to a packed restaurant at 10:30am on Saturday, but were able to be seated just 10 minutes later. 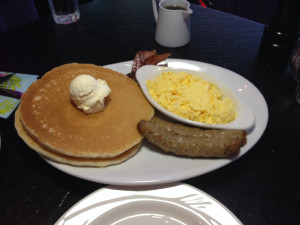 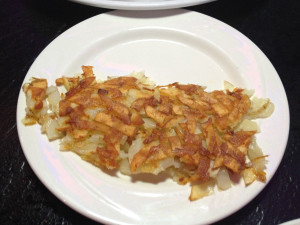 Their servings are known to be huge, so we shared the Peppermill pancake combo (3 pancakes, 3 eggs, 2 sausages and 2 bacon strips, $13.50) and a side of hash browns ($4). It was all good, solid, classic breakfast fare. The pancakes were fluffy and tender, the sausage links were large and meaty and the hash browns had a nice crispy crust.

Service was fine and the restaurant was exactly was I wanted it to be – a fun part of Vegas history.