It was our last night in Vegas and we debated the different options. Dr. Marc was going back to Lotus of Siam, but Steve felt like he had eaten a lot of Asian food during the week. My Seattle friends were hitting the Bacchanal buffet, but we were both still sick and did not feel the need for an over-the-top gluttonous amount of food. (Although, I am sad I didn't go to a single buffet during the trip, unlike my friend Nate, who went to half a dozen) Finally, we settled on Holstein’s, a gourmet burger joint in the Cosmopolitan hotel. I have to admit their assortment of boozy shakes was a major factor in choosing them over the all the other burger options on the Strip.

We arrived at 8pm on Sunday night and the restaurant was packed; the wait was 90 minutes long. We hopelessly meandered down the bar when I spotted two shorter stools tucked under the very end of the bar, in an area that was lower than the rest. It almost looked like a handicap accessible space, right in from of the register. We inquired if we could sit there and we got a nod from the busy bartender. Score! 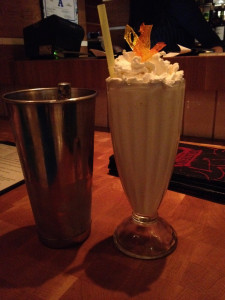 I had the Crème Brulee shake (frozen custard, caramel garnish, Blue Ice Crème Brulee Vodka, $13). It was cold, smooth and creamy, the perfect salve to my sore throat. It was a tad too sweet, but that’s okay (I drink like a sorority girl, remember?). I love that it came with the metal canister – I think all shakes should be served that way. 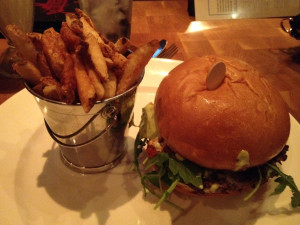 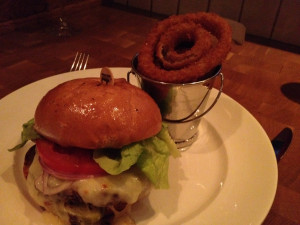 There are a lot of tempting options on the menu. There was a great looking lamb burger, but I decided to go with Holstein’s signature, the Gold Standard (dry aged beef sirloin with bacon, aged goat cheddar, tomato confit, baby arugula & garlic-chive aioli, $18.5). Goat is my least favorite cheese, but I wanted to experience the burger the way the chef meant for it to be enjoyed, so I ordered one, medium rare. The burgers come with fries, but Steve opted to pay the extra $2 for the thick cut onion rings with his burger (medium rare with provolone, lettuce and tomato).

The burger looked great; it was piled high with all the accouterments on a toasted brioche bun. Sadly, the burger was overcooked to medium well (as was Steve’s) and there was too many flavors competing against each other. The skin-on fries were better than the thick, too-bready onion rings.

Steve attempted to get a glass of red wine, but they did not have first two he ordered, and he finally settled on an “okay” Cabernet. Our bartender was proficient, even with the crowded restaurant. The prices are Las Vegas high, but that’s to be expected.

I realized that during the week I had not dined once in the Westgate Hotel, where the tournament was located, but had eaten at the Cosmopolitan 3 separate times (Secret pizza, Jaleo and Holstein’s). I guess it’s a good thing that Bridge Nationals will be there in 2019 and 2024, but I will be getting my burger and boozy shake elsewhere.


http://www.holsteinslv.com/
“Do you want dessert?”

I shook my head no. Dinner at Thomas Keller’s French bistro, Bouchon had been lovely – the food was excellent and the service, impeccable. We shared an entrée of Moules au Safran (Maine bouchot mussels, steamed with white wine, Dijon mustard & saffron, served with French fries, $28.5) as our appetizer and then split the Steak Frites (pan-seared ﬂat iron, caramelized shallots & herb butter, served with French fries, $37), for dinner. Our waitress was nice enough to offer us a pommes purée, in lieu of a second order of fries. 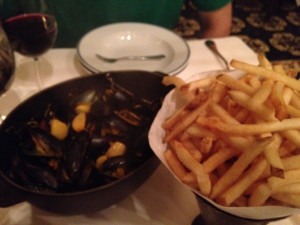 The mussels were small, but plump and tender in a strong white wine and herb broth. The tureen was large and perfect for dipping the superlative baguette. The fries were hot, crispy and perfectly salted. 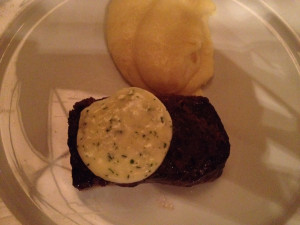 The flat iron steak was tender and flavorful, and the pommes purée was the smoothest, silkiest mashed potatoes you can imagine. Our side order of haricot vert (French green beans) was delicious as well, but I was too full to finish them. So, when he asked if I wanted dessert, I declined.

We left the restaurant and he walked me past the set of elevators. I inquired where we were going and he led us outside to the pool and gardens of the Venetian Hotel. The air was warm and balmy and we immediately came upon three drunk girls playing in a fountain. Not finding what he was looking for, he steered us back inside the hotel.

“Do you want to go on the Ferris wheel?”

Like the Eye in London, Las Vegas has built a mega Ferris wheel, with pods that can hold 24 people and a single revolution takes half an hour. “No,” I replied, “It's super expensive - $35 a person and who wants to be stuck for half an hour with 22 strangers?”

We continued walking through the casino in the Venetian. I started to steer him towards the direction of the monorail which would bring us back to the hotel.

“Why is that?” I asked and he told me that it was a Danger Zone.

Back in April, we were at a Red Sox game and someone proposed over the Jumbotron. He turned to me and said, “Don't worry, I know better than to do that here. Fenway Park is a Safe Zone.” I remember thinking at the time, Safe Zone??? We are talking about a proposal, not sniper fire – did I really need a Safe Zone?

But here we were, three months later and he was telling me that the casino floor of the Venetian Hotel was Danger Zone.

“Really? Here? This is a Danger Zone?” I asked incredulously. We were literally walking between the slot machines and the roulette wheel.

Yup, he replied. He informed me that he had two different plans earlier in the week but they both fell through so, this is it.

There was a sign for the clock tower which we followed, hoping it would be what he was looking for. So, we went outside the Venetian Hotel, and found a (relatively) quiet spot in front of the canal, adjacent to the clock tower.

He got down on one knee, held my hand in his and proceeded to take out a ring box. However, it was still wrapped, in beautiful silver paper with blue ribbon from Shreve, Crump and Low. He had to release my hand to unwrap it. After fumbling with the paper, he revealed a box in which the actual ring box was inside of, so he had to pry that box open as well. As he wrestled with the box, I oscillated between speechless and hysterically laughing in disbelief that it was actually happening. Finally, a minute later he opened the ring box and it was the most breathtaking engagement ring. His proposal was lovely and of course I said “Yes!”

Hysterically enough, as we kissed and embraced in celebration, cannons started going off, I assume from the Treasure Island hotel pirate battle that goes on nightly. Clearly, Steve planned it all perfectly. I suggested that we go visit the real clock tower in Venice for our honeymoon. 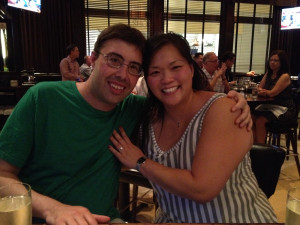 Having a celebration glass of Champagne At Joe's 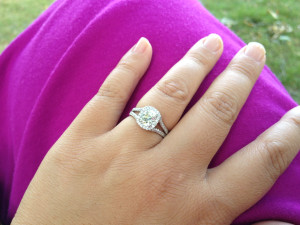 My amazing ring - Cushion cut in a halo with a pave split shank platinum setting. 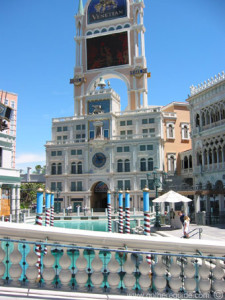 Where he proposed, in front of the canal, next to the clock tower at the Venetian Hotel.
Collapse