After a morning of trying on wedding dresses, it's perfectly natural to think, "Hmm, I really need a burger, fries and a shake," right?

Denver-based chain Smashburger is the latest entry in to the better "fast-food" burger race. It opened in December across from the Natick Mall. It's aiming to compete with places like B.Good and Shake Shack. Smashburger advertises that they use fresh, never-frozen 100% Certified Angus beef and have hand-spun shakes. I got the truffle mushroom and Swiss burger (truffle mayo, sautéed crimini mushrooms and aged Swiss on an egg bun, $6.39). I shared a side of Smashfries (tossed in olive oil, rosemary and garlic, $2.29) and a salted caramel shake ($4.59) with Christine, one of my intrepid bridesmaids, who came up for a weekend of dress shopping and cake tasting. 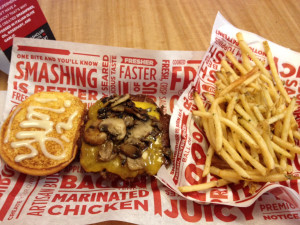 They will only serve the burger medium or above, but I still really enjoyed my burger. It was flavorful and juicy (and how cute is it that they wrote "yum" in mayo on the bun??). The fries were thin, crispy and golden. I liked the addition of the rosemary and garlic. I loved that the shake was served with a metal canister.

I think that Shake Shack wins in the head to head comparison, but there wasn't a 35 minute line for Smashburger, so it wins for convenience.

http://smashburger.com/
Marliave is a historic Boston restaurant. It opened 132 years old as a French restaurant, it became a speakeasy during Prohibition and then was an Italian joint. I closed 2 years ago and Scott Herritt, of Grotto, bought it and is now serving a mostly French inspired menu, with some English/Irish/New England cuisine, thrown in the mix.

Restaurant Week has morphed in to Dine Out Boston, giving restaurants a choice of 3 price points ($28, $33, $38) for dinner. It’s a marginal improvement. I tend to avoid restaurant week, but my friend Leslie wanted to go and suggested Marliave ($38). I saw the RW menu had many choices from the regular menu on it, so I agreed. 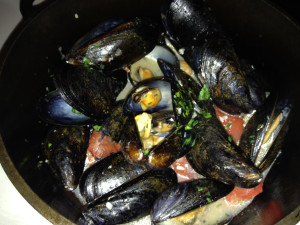 I started with the mussels ($15). It was a generous serving of classically prepared mussels (roasted tomatoes, garlic and parsley). The mussels were inconsistent in size, but the broth was tasty. The bread basket had a nice focaccia I used for dipping.

Sonia’s escargot was also a classic preparation; the snails were served hot and swimming in garlic, parsley and butter. Yum.

Leslie’s mac and cheese ($15) was decadent and rich with ziti, cream, farmhouse cheese and black truffle. The only flaw was the sauce was too thin and liquidy. 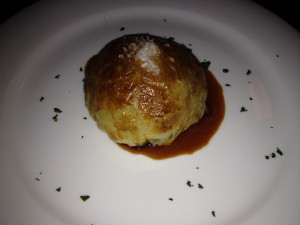 For my entrée, I couldn’t resist ordering the beef Wellington ($38). It is a classic recipe that I’ve never tried before. A filet of beef is coated with pate, then duxelle (a mixture of mushrooms, onions, shallots and herb and then it is wrapped in puff pastry and baked. Marliave serves theirs with a red wine sauce. I thought it was delicious. My filet was a nice medium rare; the foie gras, mushroom and beef encased in flaky pastry made a scrumptious bite.

Leslie had the swordfish ($35); it was massively overcooked. Sonia’s Sunday gravy ($22) over gnocchi was hearty and filling, but not really what I would want for a warm summer night. 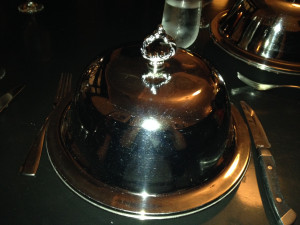 I liked that the entrees came covered in cloches and server and hostess lifted them all at the same time; I like a little dramatic flair with my meal. 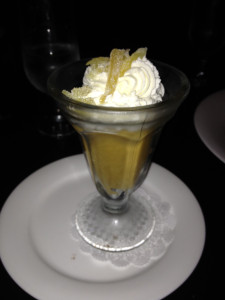 I finished my meal with butterscotch pudding ($8). It was too thick, but I liked the contrast of the candied ginger garnish. The pudding at La Brasa was far better. Leslie and Sonia both had the “melting” chocolate cake ($8), which was overcooked and not so melty. 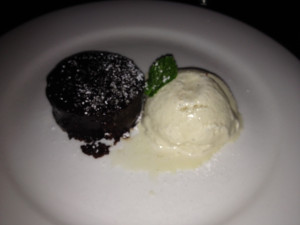 All in all, I enjoyed my meal. Certainly, for $38 it was a great value, as my entrée is regularly $38. It’s like I got my appetizer and dessert for free. Dine out Boston has not changed my mind about restaurant week – our service was horrible, which is a common occurrence during the promotion.