It was hard not to hate myself a little as I waited in line at Bagelsaurus, a brand-new bagel bakery that just opened last week. Previously, Mary Ting Hyatt sold her bagels once a week at Cutty’s sandwich shop and people raved about how delicious they were. So when her new shop opened on Mass Ave, between Harvard Square and Porter Square, I decided to check it out. The doors open at 8am so I figured I would stop by and grab a few bagels for breakfast. When I arrived at 8:05am the line was already out the door about 25 people deep. It took about 20 minutes just to get inside the shop and that is when I discovered I was waiting for bagels that were $2.50 a pop and a wave of self-hatred washed over me. I told myself it was okay because it was for the Flog, and I will go to great lengths for my loyal readers. I grew nostalgic for the days when my college roommate Joanna and I would walk down to W. 110th St. and get bagels at Columbia Bagels for $.50. 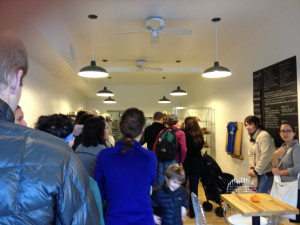 The bagels at Bagelsaurus are $2.50 each, $13 for six, $25 for a Baker's dozen. Although I really only needed two or three bagels for me and Steve, I decided to buy half a dozen. I got a plain, sesame, everything, black olive, cinnamon raisin, and a seeded wheat. They do not offer onion or egg.

It is clear that the people at Bagelsaurus have not figured out the best way to operate their lines. It was sluggishly slow; it should not have taken me 35 minutes to get my bagels. I am hoping for their sake they work out the kinks soon.

When I got to Steve’s, the bagels were still warm enough that they did not need toasting. I tried the black olive first and then had half of the everything bagel. As much as I wanted to dislike the bagel, I have to admit they were pretty good. They were appropriately dense and chewy with a crackly crust and great flavor. 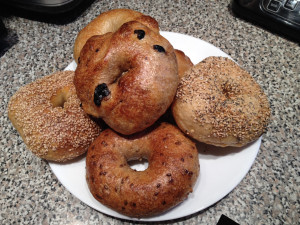 Steve liked them as well. I asked him if they were twice as good as his daily bagel at Dunkin' Donuts, which cost half the price. He mulled it over as he chewed and said “probably,” he said it “wasn't for every day but it was pretty good as a treat.” Only Steve would call a bagel “a treat.”

Although I cringe at the price tag, I guess it is still cheaper than driving to New York (or building a time machine) to get a bagel fix.