After our delicious pizza at Bob and Kimmy's, Steve and I took the short stroll down the street to Pastiche, A small bakery and café that my friend Mary told me I had to go to. The display case had many tempting confections, but the chocolate caramel cake caught my eye. I had a slice of that, and was thrilled to see they had milk listed on the menu ($1.25 for a small). Steve opted to just have a cappuccino. 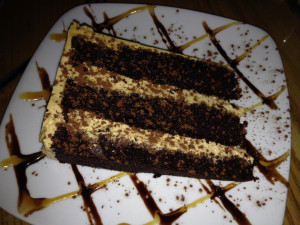 The chocolate cake was moist and had good chocolate flavor. The caramel was only in the frosting which was thick and creamy. My only issue with the cake is that it came straight out of the refrigerator case and was too cold. Cake should be served at room temperature. It was also pricey at $7 a slice

http://pastichefinedesserts.com
I was thwarted three times by Providence's hate of Mondays. I initially had plans with my friends Stephanie and Jonathan to go to Nick's, a place that was well reviewed for their brunch. I found out the night before that Nick's was closed on Mondays so I switched our plans to try Kitchen, a small café known for having the best bacon in the city. We arrived at the restaurant only to find that it was closed on Mondays as well. At the suggestion of our cabdriver, we headed to Seven stars, a nearby bakery that I am actually familiar with as they sell their breads retail at Whole Foods. 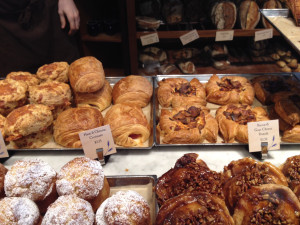 My croissant was tender and flaky, but suffered from having only a single rolled up slice of ham, concentrated just in the middle. The bacon and goat cheese danish suffered the same fate of good dough, mediocre filling; The goat cheese was chalky. 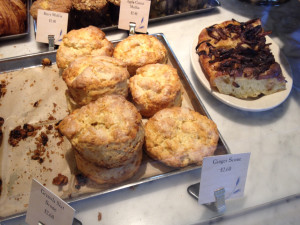 The ginger scone was much better. It was moist and studded with candied ginger, providing excellent ginger flavor throughout the pastry.

It was a pleasant café to sit and drink coffee while catching up with friends. Their breads, especially their olive, looked delicious. You can also see an attractive looking sticky bun in the corner of one of the pictures above.

Afterwards I walked back, via Federal Hill, in an attempt to get a slice of Sicilian pizza at Caserta pizzeria. Guess what? They are closed on Mondays.