I have to be honest - parking has been an important factor when deciding where to go for anything, including date night. Luckily, Commonwealth is not only on my 2015 to go list, but offers validated garage parking for $1 an hour.

The chef-owner Nookie Postal was a contestant on Bravo’s reality competition show Around the World in 80 Plates. He was the Executive Chef for the Boston Red Sox at the time, so I had to root for him to win.

The space is large, complete with a small “marketplace” and deli when you enter. We were seated in a secondary area where the walls, ceiling and tables were made from old pallets. We noshed on the bread - a pull apart parker house bread served in an adorable mini Dutch oven. It was tender, with a nice buttery exterior. 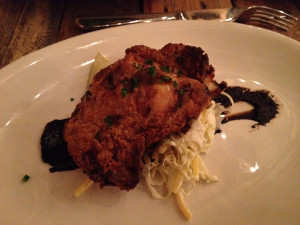 We started with a fried chicken appetizer ($11); a single thigh rested on a bed of slaw. The chicken was fried well, but a little salty. The buttermilk dressed cabbage was a nice counterpoint. 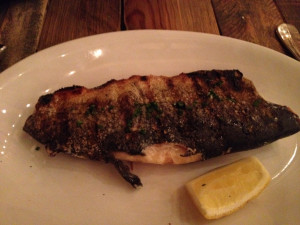 For an entrée, I had the grilled rainbow trout ($24). The fish was seasoned well on the inside, but the exterior was too salty, which is unfortunate as it was nice and crispy as skin should be. 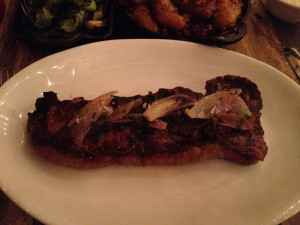 Steve’s boneless ribeye steak was cooked correctly, but did not have enough beefy flavor.

The entrees are served a la carte, so to complete your meal there are $9 sides and vegetables offered. We opted for the Boulangére potatoes and Brussels sprouts. Boulangére potatoes were tender fingerling potatoes tossed with caramelized onions and bacon. I thought they were delicious, but Steve deemed them “too rich” – I would say that is a feature, not a bug.

The Brussels sprouts were simply roasted and delicious. I had read reviews that complained that the sides were too small and too expensive, but I thought the portions were reasonable.

The Commonwealth dessert menu consists of a dozen homemade ice creams and a ton of toppings and sauces. We opted for a single scoop of coffee ice cream ($5). It was rich and roasty.

They offer a “Happy Ending” for $50 – with no description of course, so we had to ask. It’s basically a make-your-own sundae spread. Here’s a picture from their website: 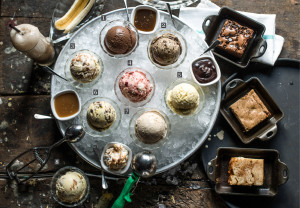 Steve really enjoyed his wine and my cocktail (The Dude Abides) was delicious. Our waiter was friendly and unintrusive. The restaurant is a nice addition to the Kendall Square area.