Charleston Cooks is a "bustling kitchen retail shop with fun-filled classes," I thought it would be fun for all of us to take a class. I picked a participation class (versus a demonstration class) because as my friend Wendy said "if we are going to pay, I want to cook, otherwise I can just watch Food Network," 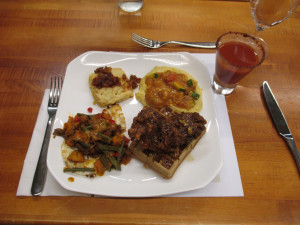 There were 12 participants in the class; Chef Haley was capable and knowledgeable. She also had one assistant, Tom. We broke in to groups of 2 or 3, each taking a menu item. Jes and I were on the biscuit team and I actually learned something; the recipe had us laminating the biscuit dough to create more flaky layers. I do this with pie crust, but I never thought about using this technique with biscuits.

How good the food is depends on how competent your classmates are. Luckily, most of the food was delicious (grits were over cooked, but none of us were on that station). I would definitely recommend checking out the class schedule if you are in the area. Husk was my reason for picking Charleston in the first place. Executive Chef Sean Brock has won James Beard awards and has garnered national acclaim for his dedication to local Southern ingredients. He narrates half of the second season of PBS's Mind of a Chef. I could tell from watching just how passionate he is about regional cuisine. We started with warm, soft rolls topped with benne seeds, an African cousin to the sesame seed with lard butter. 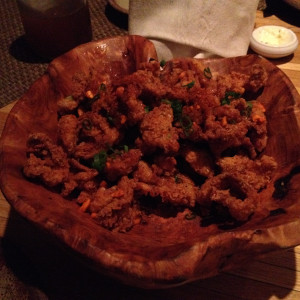 We had Brock's signature Southern fried chicken skins drizzled with hot bourbon honey ($10) and it was extraordinary. Sean Brock is a mad genius and this ranks up there as an all-time favorite appetizer. 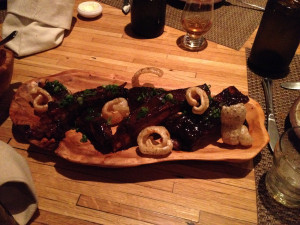 We also had the slow smoked TN pork ribs with red pepper sorghum BBQ topped with puffed pork skins ($14). Our waiter perceptively noted that there were only 4 ribs to an order and did we want to add a fifth ($3.5)? Yes sir, we do. The ribs were tender, sticky and flavorful. The meat had the right amount of chew and smoke. I realized that with the pork rind garnish on the ribs, we had not one, but two different skins on the table. 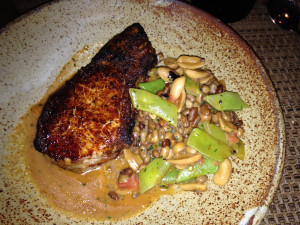 I ordered the VA heritage pork with heirloom red peas and boiled peanuts ($30) The bone in pork chop was perfectly cooked and for lack of a better word, deeply porky. I was less impressed by my side of beans and peanuts, but there was still chicken skin to munch on, so I was happy. 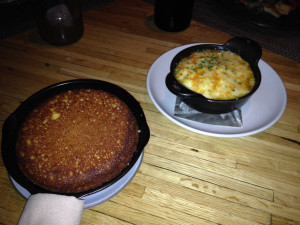 For sides ($8, each) we had a skillet of cornbread with TN Bacon and grits with cheddar. I thought the cornbread was a little dry and I barely tasted any bacon. I am also a Yankee and like my cornbread sweet, so I may be biased. The grits were outstanding; they were creamy, cheesy and silky. 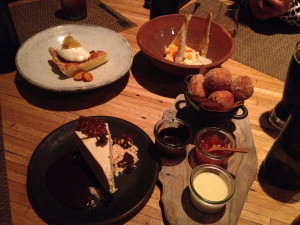 We shared 4 desserts ($7, each): Meyer lemon chess pie, Carolina Gold rice pudding
sweet vanilla doughnut holes and a peanut butter pie. It's hard to beat hot munchkins, especially with chocolate dipping sauce, but the lemon pie was a close second. I thought the peanut butter pie was really similar to my recipe. The rice pudding had "rice crisps" that were too hard and crunchy.

The cocktails and spirits flowed and the service was attentive and thoughtful. I would definitely recommend Husk to anyone going to Charleston.