It is the younger, more affordable sibling of restaurant Bricco in nearby Hartford. I was there last week with Christine and a friend of hers. The place was packed, so even though we had a 7:30 reservation, we weren't seated for another 15 minutes. A pizza oven is the centerpiece of the restaurant, so I knew I wanted to try one of their artisan pizzas for an appetizer.

We are seated next to a large party of one man and a gaggle of 13 women. They screamed, yelled, hooted and hollered in laughter all evening long. It made conversation difficult, at best. It makes me feel old, but I can’t stand the trend of loud restaurants. Please, invest in some noise dampening panels.

The bread basket was a nice focaccia with a plate of green olives. We shared the crispy rosemary potato pizza ($16) which was described as having Italian bacon, mozzarella and chili oil. We all enjoyed the pizza; The crust had great flavor and texture. The crispy potatoes and the salty bacon played nicely with the creamy mozzarella. The aforementioned chili oil was not apparent. 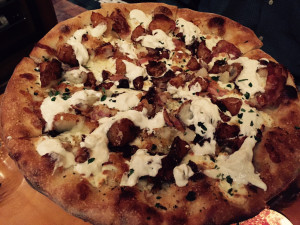 I had the fennel and black pepper crusted tuna ($29) for my entrée. I told my waitress I wanted my tuna as rare as they would do it, and they cooked it accordingly. It was served atop braised escarole, white beans, green olives and Cara Cara orange segments. The brininess of the olives, the tart citrus and creamy white beans were a terrific combination. I really enjoyed the dish. 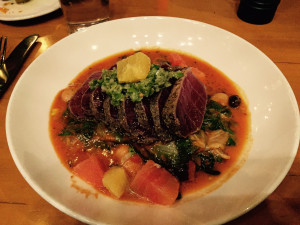 Christine had the braised lamb shank ($24) - The meat was tender and it was a perfect hearty winter entrée, but the lamb was served off the bone. When I order a shank, there better be a bone. 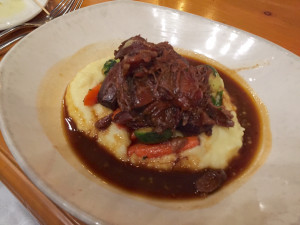 Our dining companion had the sirloin steak ($34). I did not try it, but he said it was excellent and finished his dish.

The food came out slowly; our meal took 2 1/2 hours to complete, from start to finish. Our waitress was friendly and kept offering to bring us baskets of bread, but she promised they would be hot and they were lukewarm, at best. Don't promise me hot bread if you're not going to deliver.

The prices are high, but the quality and flavor of the food delivered. I recommend giving Bricco a try if you're in the area and have a couple of hours to burn.