What is it about New Haven and pizza? It is hard to believe it was over five years ago when I accomplished the herculean task of having Pepe's and Sally's in the same afternoon, one after the other. Sally's has since closed, but Bar is a very respectable entry in the contest of New Haven's best pizza.

Steve wanted to gather a bunch of his Connecticut-based college friends together for a night out. When he suggested we try Bar, I was in. I have heard from several different people about how I "HAVE TO" try their mashed potato pizza.

We got there an hour early, and thank goodness we had a reservation (they only take reservations for larger groups of 10+). At 5:30pm, the wait was 90 minutes and the large restaurant and bar area was packed to the gills. There is a pool table and I almost got hit by a pool cue, twice.

The menu is consists of one salad (seasonal greens, sliced pear, caramelized pecans,
and crumbled blue cheese) and pizza (3 sizes)

We ordered three large pies: Mashed potato (1/2 with bacon), Eggplant, and Sausage, pepperoni & onion. They were huge, but super thin – the size of a half sheet tray. The mashed potato with bacon was outstanding, as promised, but the other two were equally delicious. The crust was flavorful and had the right amount of chew. The toppings were generous and delicious. 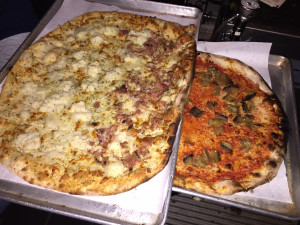 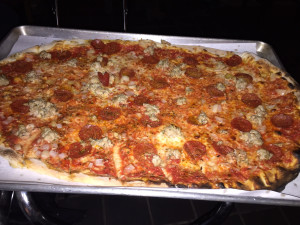 The large pizzas start at $15 and toppings range from $2- $5, each. The bowl of salad was $22 and it was really good; the crunchy pecans played nicely with the sweet pear and salty blue cheese.

They mircobrew their own beers, as well as having a large beer list. Steve loved his dry Irish stout. The venue becomes a nightclub at 10pm, but we didn't stay for the dancing. If I lived closer, it would become a regular haunt. Definitely check Bar out, if you are in New Haven, but be prepared for a wait.